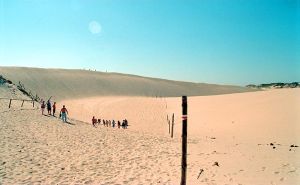 Sand dunes in the park


Slowinski National Park, the UNESCO recognized MaB Biosphere Reserve, lies in the northwestern part of Poland. Flanked by water bodies on its north and south and occupying the central part of the Polish coast (between Leba and Rowy), the park is spread over an area of 18,618 ha. While the 32.5 km Baltic Sea coastline constitutes the northern border of the park, a chain of four beautiful lakes - Lebsko, Gardno, Dolgie Wielkie and Dolgie Male - marks its southern border.