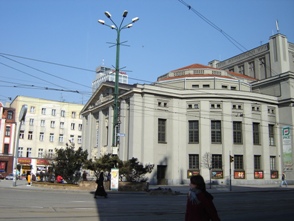 The Stanislaw Wyspianski Theatre in Katowice


Located in the southern region the nation, in Upper Silesia, Katowice is better known as an industrial city than a tourists' destination. Katowice has some of the biggest agglomerations in central Eastern Europe and in its heydays numerous coalmines and steelwork factories flourished here.

Set in the traditional industrial heartland of Poland, Katowice was known for heavy machinery and chemicals, coal iron and zinc which were mined from that region. Katowice is also the capital city of the Silesian Voivodship and the seat of the administrative and local government of that region.

The city suffered severe ecological damage during the communist governance of Poland, by the People's Republic of Poland. An urban legend that is doing the circles says that a group of foreign scientists once studied the residents of Katowice and found that they had "mutated" them selves to adapt to the spectacular pollution produced by the heavy industries in the city. In fact their health would be endangered by cleaner air!

Prior to the liberalization, these industries functioned with no pollution control what so ever and as a result the city was enveloped in a layer of grime. Not so any longer. Recent policy changes have ensured reversal of most of the damage dine during that era.