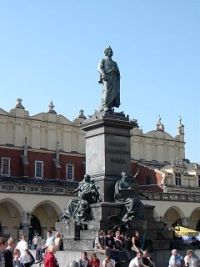 Monument of Adam Mickiewicz, one of the greatest Polish Poets (Krakow)


The population of Poland is around 38 million. The World War II toll on Poland was a staggering 6 million-including 3 million Jews slaughtered in the Nazi death camps. At present, more than 98 percent of the people are Poles, with small groups of Ukrainians, Belorussians, Germans, Slovaks and Lithuanians.

The Poles speak a Slavic language and have a special fondness for English. In fact, English is the most popular foreign language in Poland. The Polish population is largely urban centric with 60% of the population living in cities. There are a number of large cities, including five with populations of more than 500000. Warsaw, the capital, is the largest with a head count of 1.7 million inhabitants. Krakow (Cracow), Wroclaw, Poznan, Gdansk, Szczecin and Lodz are some other large metropolises.

Poland's national culture emerged as a synthesis of Latin and Byzantine influences and was further engendered by the numerous European occupations, throughout its history. Customs, traditions and mores display a diverse mix of the East and the West - a colorful cohabitation of the vibrant Eastern ornamental style and the somber Islamic influence.

Paper cut outs from Poland is renowned throughout the world for their artistic ingenuity. Folk cut outs is one of the indigenous art style and practiced widely in non-urban centers. The cut outs are used specially for Christmas and Easter home decoration. An interesting off shoot of this art is the wafer cut outs. Flour and water are the basic raw material out of which Polish women, devoid of any fine art training, shape designs of astonishing beauty.

Polish cuisine and dining table etiquette is a perfect reflection of the warmth in the Polish character. Having a meal with one's family is not just consumption of food - it is celebration. Guests are always welcomed. Breakfasts are generally heavy with vegetables and cold cuts of meat. Dinners, even more so. Only suppers are a tad lighter, perhaps, keeping in toe with the universal proverb: After dinner rest a while, after supper walk a mile. The Poles are the original potato eaters and potatoes have been the darling of the Polish kitchens through centuries. Meat is also a mainstay (cold cuts and sausages mainly) and is grilled more or less ceremoniously at the country home, in the garden, or on the front lawn.

Poles are gregarious in character and love to show affection during interaction. The word "czesc" is Polish for "hi", however, even an English "hello" is guaranteed to start an avalanche of greetings with faces beaming, all around. The first few minutes of any meeting is spent in greeting each other and shaking hands. Familiarity is expressed with embraces and pecks on the cheek. To the unaccustomed eye, it may appear to be disconcerting at first, however it is nothing but an example of Eastern fervor.

A foreigner never feels at a loss in Polish company. Even a smattering of English is ample for creating enthusiasm and he or she is immediately inculcated in the group. A foreigner being taught the rudimentaries of Polish is a common sight in street-eateries, cafes and restaurants. Amidst much laughter and fanfare, somebody is bound to suggest the tongue twister "W Szczebrzeszynie chrzaszcz brzmi w trzcinie" (say: Vuh Shchebsheshinyeh kshanshch bshmee fuh tchuchynyeh)," which is difficult even for the Poles. If all else fail, the universal gesture of bonhomie spiced with generous smiles save the day.

Bruderszaft is a fraternal toast, a sealing of comradeship and declining it can be seen as an insult. Relationships become more cordial after this ceremony and people graduate to using first name of each other. Bruderszaft is two people raising toasts simultaneously with arms interlocked and downing their drinks together. The last part is an exchange of kisses and a "Call me Marek," - "Call me John".

The prefix Pan (Mr) or Pani (Ms) is the safest way to address someone who is Polish. This should be accompanied by the first name, of course. Taking the surname of a person is seen as a slight even when a Pan/Pani is placed before.

"Ty" is polish for "you". If one is allowed to call the other "Ty", it means that the relationship is a lot informal. Nevertheless, familiarity has its own code of conduct. It is important to remember name days (a patron saint's day - rather than birthdays). This anniversary is important for Poles and in no other culture, it is celebrated with equal fanfare. In order to avoid awkward situations, it is worthwhile checking the calendar and marking the appropriate date. If you miss the actual day, you can "make up" for the omission within the "octave" (i.e. the next few days).

Literary and artistic figures have played a major role in public life throughout Poland's history. Poles are reputed to be avid readers and can be said to have a keen interest in the arts. Polish writers and filmmakers in particular are internationally renowned. Poland has a lively cultural scene with around 280 arts festivals taking place across the country covering all types of music, film, video, theatre and the visual arts. Poles are particularly keen on jazz music with around 30 jazz festivals taking place each year.