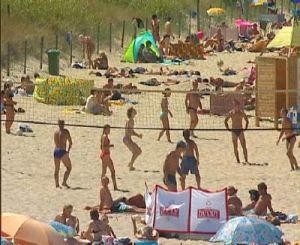 
Baltic Sea is the largest, brackish (low salinity content) water body in the world. One of its chief characteristics is that it divides itself into a number of basins of varying depths, separated by shallow areas or sills. Numerous tributaries contribute to its brackish nature. Moreover, the connection with the North Sea is extremely narrow, the shallowest sill being 18 meters deep. This also helps in keeping its salinity content down.

Baltic coastline is shared by nine countries. Sweden and Finland in the north, Russia, Estonia, Latvia and Lithuania in the east, Poland in the south and Germany and Denmark in the west.

Baltic Sea is a semi-enclosed sea of about 415000 square kilometers. Proceeding from the northern end, it includes the Bothnian Bay and the Bothnian Sea. At the southern end of the Bothnian Sea, the island of Aland divides the Aland Sea from the Archipelago Sea. The Gulf of Finland is the eastern arm of the Baltic Sea. The central portion of the Sea, known as the Baltic Proper, includes the Eastern and Western Gotland Seas. To the east and south are the Gulf of Riga, and the Gulf of Gdansk. Moving to the west are the Bornholm and Arkona basins, followed by the Sound, the Belt Sea and the Kattegat.

About 16 million people live on the coast, and around 80 million in the entire catchment area of the Baltic Sea. The catchment area includes part of Belarus, the Czech Republic, Norway, the Slovak Republic and Ukraine, as some of the rivers find their sources here.

In May 2004, the Baltic Sea became almost completely a European Union internal sea when the Baltic States and Poland became parts of the European Union, leaving only the Russian metropolis of Saint Petersburg and the exclave of Kaliningrad Oblast as non-EU areas.

Baltic coastline in Poland is 788 kilometers long and is a tourist heaven. Apart from the usual golden beaches, studded with pieces of amber, the windy call of the sea and photogenic cliffs, the coastline is dotted with historical towns and cute fishing hamlets-each providing a wonderful opportunity to get lost, willingly, from the hustle-bustle of a calibrated lifestyle, for a couple of days.

Kamienie Pomorskie, Stargard Szczecinski, Kolobrzeg and Szczecin are places with a past. They are must-sees in a history lover's itinerary. Kamienne kregi in the Grzybnica natural reserve near Koszalin, Jezioro Turkusowe (The turquoise lake) near Wapnica (near Miedzyzdroje), Jezioro Szmaragdowe (The Emerald Lake) near Szczecin, the church in Trzesacz, which looks as if it were sliding into the sea or the so called Szwajcaria Polczynska - are all delightful spots, capable of raising the wanderlust to an all-time high.

Leba and its surroundings: The Slowinski National Park, made famous by the UNESCO listing of World Biosphere Reserve is famous for its moving sand dunes. The wind has been noted to push dunes from 2 to 9.5 meters annually.
Baltic Sea Resorts  |  The Resort Town of Sopot